Now you’ve done it. This instalment introduces us to the dot matrix guitar (‘printar’) emanating dotty boss riffs and hot licks (literally: the print head gets hot enough to fry eggs on) which are played and amplified in your general direction, love. Subsequent misery ensues: 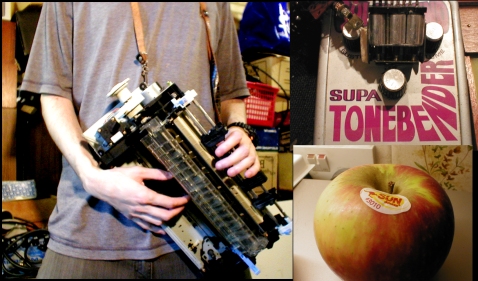 This episode contains a sob story, but more importantly: a celebrity interview(!), but I shanâ€™t spoilt it by revealing too much. How refreshing! Hereâ€™s a mapping to guide you through this episodeâ€™s construct:

Under a cloud of financial/general difficulties our host finds himself homeless, so woos us with his â€™sonic portraitâ€™ skills that showcase his potential as your personal in-house artist (if you grant him accommodation, that is). A marvellous gem from his music collection follows:

Following the well-trodden path of saying â€œhelloâ€ on radio and suchlike, attempts are made to orientate the listener as fully as humanly possible. However, the introduction is stripped of all credibility and matter-of-factness, as the dialogue was recorded in anti-realtime from within a phase inverted superelectromagnetic space-chamber which interferes with oneâ€™s perception of time.

I have it on good authority that in spite of the embarrassing proclamations herein, his parents are still proud of him; mainly because of the anti-realtime time disruption facilitator thingybob, a difficult thing to build indeed.