The second half of Alex Fitch’s 2008 interview with Alan Moore – originally broadcast on Valentine’s day. Alex and Alan discuss Alan’s epic graphic novels Lost Girls and The League of Extraordinary Gentlemen: Black Dossier and look at Alan’s depictions of procreation in Swamp Thing and Miracleman 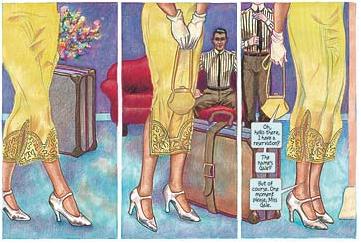 Excerpt from Lost Girls by Alan Moore and Melinda Gebbie

Visit the home of this episode at archive.org

N.B./ As no-one has entered the competition – listen to the podcast for more details – the deadline has been extended ’til midnight 29/02/08…

Comics news…The nominations for this year’s Eagle Awards have started – www.eagleawards.co.uk…Regarding the roll of honour which is listed at the bottom of the voting form – at the risk of being terribly egotistical, may I suggest me, Alex Fitch (if my name isn’t listed, please type it in) in the category of “entrepreneur whose achievements have… increased public awareness (of comics)”? (I know it says “in print”, but then I do publicise the show in [electronic] print)… If we can get Oli Smith’s London Underground Comics video podcasts listed under favourite TV / film (going for the loosest definition of the words), that would be great too.

One thought on “Panel Borders: Looking for Lost Girls part 2”