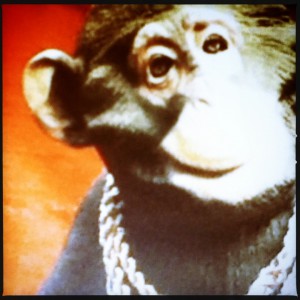 The newspaper cuttings are convincing forgeries, but forgeries nevertheless. By dint of the pincer-like precision of my research, if I mean pincer-like, and I think I do, I can reveal exclusively that the deliberate counterfeiting of details of Urgh the howler monkey’s biography served a malign purpose, but fortunately not one with cataclysmic world-juddering implications. Indeed, if the fiendish scheme had come to fruition, it would have had an effect only within the immediate vicinity of the information centre, and the effect itself, hideously awful as it would be, would have dissipated within a day or so. It makes one wonder why some weedy-brained ne’er-do-wells will go to such lengths, it really does. But perhaps that goes some way to account for the weediness of their brains.

Dobson And The Pit

This episode was recorded on the 28th July 2011. A complete transcript of this episode can be found on Frank Key’s Hooting Yard website. Accompanying Hooting Yard On The Air, the six publications We Were Puny, They Were Vapid, Gravitas, Punctilio, Rectitude & Pippy Bags, Unspeakable Desolation Pouring Down From The Stars, Befuddled By Cormorants , Inpugned By A Peasant And Other Stories and Porpoises Rescue Dick Van Dyke are available for purchase