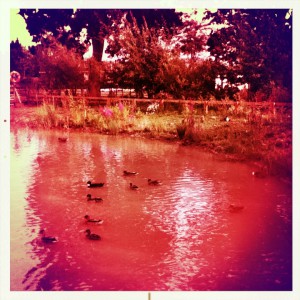 There was no sign of the twinkly-eyed ancient, but I saw the quantity surveyor, heading home from work. I accosted him, and told him I had got my lost rag back. I thought he would be pleased, but his eyes filled with tears, and he said:

“What does it profit a man, that he regains his rag but knows not the measure of the quantities he has surveyed?”

And he swept past me, hugging his briefcase to his chest, and trudged away into the salt and sand-strewn streets as night came crashing down.

This episode was recorded on the 9th June 2011. A complete transcript of this episode can be found on Frank Key’s Hooting Yard website. Accompanying Hooting Yard On The Air, the six publications We Were Puny, They Were Vapid, Gravitas, Punctilio, Rectitude & Pippy Bags, Unspeakable Desolation Pouring Down From The Stars, Befuddled By Cormorants , Inpugned By A Peasant And Other Storiesand Porpoises Rescue Dick Van Dyke are available for purchase