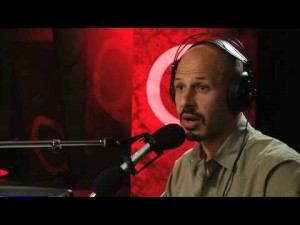 How we conjured an American we spotted on a clip on Youtube USA, into the London studio. The Merchant of Mirth, the Fakir of Middle Eastern Ridicule…. Maz Jobrani, arrives in UK, swings by the studio and announces live on air what he’s just found out: he’s going to be a dad for the first time. Between anecdotes about Iranian family, the US comedy circuit and what Americans don’t know, we hear what it’s like being an Iranian on the west coast.

This programme was recorded at the Resonance104.4fm studios on November 5th 2007. Produced and presented by Fari Bradley, Six Pillars to Persia is on Mondays at 1.30pm