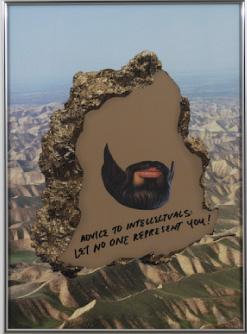 Interviews recorded in UAE with artist Bahar Behbahani, the Slavs and Tatars collective and tracks from the new album by singer Sussan Deyhim. The film by Behbahani at Sharjah Biennial involved a collaboration across the Caspian sea while the installation by the Slavs and Tatars created the setting for ‘Friendship of Nations’, a work looking at the revolutionary potential of crafts and folklore behind the ideology of two key modern movements: the Islamic Revolution of ’79 and Poland’s Trade Union movement of the 1980s. Sussan Deyhim has been played on the show since 2005, her new album City of Leaves includes collaborations with Richard Horowitz and DJ Spooky.