It was not night-time, sultry or otherwise, when Bucephalus arrived at his destination. It was day, bleak, grey, and wretched, and the majestic horse stood still at the river’s edge, snorting. Alexander the Great did not expect him back in Macedonia for a week. Remember this is the Ancient World, so such landmarks as line the Bosphorus as the Galata tower, the palaces of Dolmabahce, Ciragan, Yildiz, and Beylerbeyi, the Rumeli and Anatolian Fortresses, and the Kuleli Military High School had not yet been built. Bucephalus began to trot, following the river’s course, hoping to find a field where he could have a restful time munching nutritious foliage. 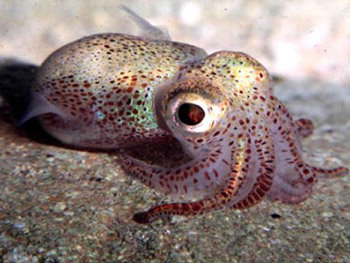 It was late afternoon on that Thursday when the horse decided to rest, and planted his hooves in the mud at the edge of the Bosphorus where today one finds the Bogazici suspension toll bridge. He noticed a churning in the waters of the mighty river, and turned his horse-head to look more intently. He was astonished to see a tangle of cephalopods thrashing around in the river, cephalopods large and small, octopuses, squids, cuttlefish and chambered nautiluses, emitting clouds of ink, tentacles flailing. What were they doing upriver, rather than in the dark, cold abysses of the sea? Were they lost, and did this explain their frantic activity? Cephalopods are probably the most intelligent of invertebrates, with huge pulsating brains, and it is easy to imagine that the realisation of being lost in the Bosphorus could induce panic among them.

This episode of Hooting Yard was first recorded on the 1st March 2006. A complete transcript of all Hooting Yard episodes can be found on Frank Key’s website.

One thought on “Hooting Yard: Bucephalus and the Cephalopods in the Bosphorus”