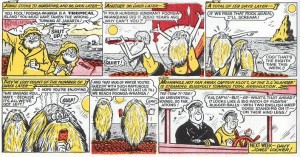 In the last of January’s quartet of shows about four generations of British Cartoonists, Alex Fitch talks to writers Alan Moore and Pat Mills about their favourite cartoonist, the late Ken Reid who drew Roger the Dodger in the 1950s Beano and a variety of underrated strips in children’s comics such as Wham! and Whoopee! including the creepy classics Faceache and Frankie Stein, up to the 1980s…

To download or stream the show in a variety of different formats, please visit the home of this episode at www.archive.org

Links: Page from Jonah, April 1959, as featured on the BBC’s Comics Britannia
Page from Jonah, November 1959, as featured at enterthestory.com
Ken Reid tribute page at www.comicsuk.co.uk
Page from Dare-a-day-Davy at Peter Gray’s Ken Reid fan page
“The Beano at 70” feature in The Scotsman
Visit The Cartoon Museum to (currently) see a couple of original pages of Jonah artwork on display in the museum…

Published in The New Yorker and McSweeney’s and lauded by Nick Hornby for his “writer’s eye for the truth,” Adrian Tomine started young by self-publishing his comics anthology Optic Nerve as a teenager in Sacramento. Nearly two decades later, his penetrating, crisply drawn portraits of young adults’ longing and alienation have made him one of America’s most acclaimed graphic novelists.

In conversation with Toby Litt on his first UK appearance, Tomine discusses his recent works, Shortcomings and Summer Blonde, and the collected manga of Yoshihiro Tatsumi, which he is editing. Followed by book signing.