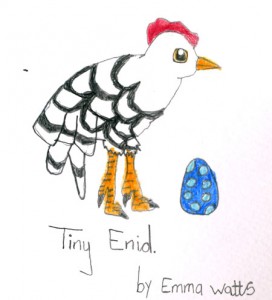 Yes, sad to say there was a time when I was beset by anxiety dreams, in which I was poised, with a sharp pair of scissors, to cut out “guns” and its definition from a brand new dictionary, the pot of mucilage and a spatula beside the dictionary on the desk, and my hand trembled and I could not make the snip. I had this dream, or nightmare, over and over again for a number of years. In a more alarming variant, I dreamed that I managed to cut out the “guns” entry, but then mislaid it, or dropped it into a wastepaper bin, or it was consumed by flames and I had but a pile of ash, which I then painstakingly tried to paste, atom by atom, into the dictionary, with mucilage, and I would wake up shrieking.

In Which Mr. Key Contemplates Moving To North Korea

This episode was recorded on the 20th October 2011. A complete transcript of this episode can be found on Frank Key’s Hooting Yard website. Accompanying Hooting Yard On The Air, the six publications We Were Puny, They Were Vapid, Gravitas, Punctilio, Rectitude & Pippy Bags, Unspeakable Desolation Pouring Down From The Stars, Befuddled By Cormorants , Inpugned By A Peasant And Other Storiesand Porpoises Rescue Dick Van Dyke are available for purchase