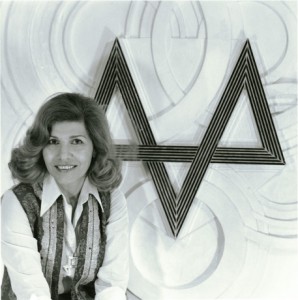 Monir with a relief piece, 1970s. Photo courtesy of artist

John Cage called her ‘that beautiful Persian girl‘, Jackson Pollock, though unfriendly, openly declared an admiration for her art. Born 1924 in Iran, Monir Farmanfarmaian later brought a flavour of Iran to New York’s avant garde, amongst whom she was circulating. It was often reported that one of her pieces had its place on Andy Warhol’s desk for example.

Her signature work has been since that time, fractal mirror sculpture, mirror mosaic and reverse-painted glass which overall embodies her lifelong fascination for natural beauty and light.  And as any sprightly octogenarian still producing work should, Farmanfarmaian has just released a book: Cosmic Geometry ((Damiani Editore & The Third Line, Edited by Hans Ulrich Obrist) with passages written by such artist friends as Frank Stella and Shirin Neshat.

In this frank interview the artist discusses her first moment’s of inspiration with mirrors, kills a money spider, reflects on her life and personal art collection and bemoans the proliferation of cheap Chinese products in Iran.