Captain Cake had gone to sea in a battered and leaking ship. He drank his grog from a bakelite cup. When he walked upon the orlop deck he sang in vulgar Latin, and every morning he made the sailors pray at Matins. The bo’sun had a voodoo doll pierced with many pins. 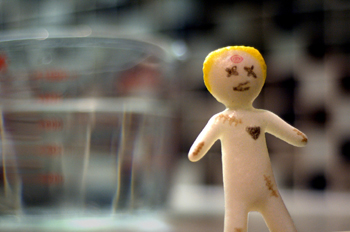 But Captain Cake had a jacket made of tin, and he made the bo’sun walk the plank till he fell into the churning sea. All the sailors rollicked with glee. So Captain Cake sat in his cabin reading a book about gourds. Then they landed on an island of bloodthirsty hordes. The purser chucked the voodoo pins at the leader of these folk, who put down his sword and began to choke. Captain Cake wanted to be the island king, but they already had a god with bright and fluttery wings, and the god made the captain bow down on the sand. So if you sail the hectic seas be sure to understand that leaking ships can run aground at the drop of a hat. If only Captain Cake had realised that.

This episode was recorded on the 10th April 2008. A complete transcript of this episode can be found on Frank Key’s Hooting Yard website. Accompanying Hooting Yard On The Air, the two publications Unspeakable Desolation Pouring Down From The Stars and Befuddled By Cormorants are available for purchase.