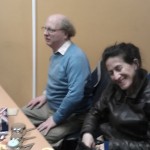 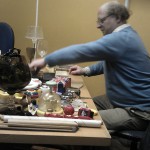 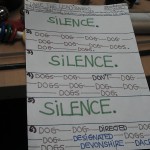 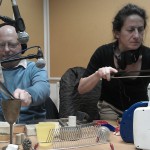 Adam Bohman and Patrizia Paolini arrived on the dot of 8:30 to assemble their extensive array of musical apparatus in the Resonance studios in Borough High St.
Adam admitted it was not as extensive as usual, nonetheless they were upbeat about the performance.

The hour begins with 2 extracts from a cassette tape Adam made for me (with artwork) – Luis De Pablo (extract) then we hear “The Laboratory Has Been Locked For Three Hours Solid” from Naked Lunch, read by William Burroughs.

PART A.
=======
IN THE FIRST HALF THE DUO’S MATERIAL WILL INCLUDE READINGS FROM THE METROPOLITAN POLICE LEAFLETS, GENERAL TALK ABOUT THEIR EVERYDAY LIVES, COMMENTS ON THE RECENT SOMEWHAT INCLEMENT WEATHER, A BITING SATIRICAL SWIPE AT FOXES GLACIER MINTS, A TEXT PIECE , USING AS ONE OF ITS SOUND SOURCES AN AMERICAN PAMPHLET OF CHICKEN DISEASES AND TWO IMPROVISATIONS WITH PREPARED STRINGS , OBJECTS AND TOYS.

PART B.
=======
THIS SECOND HALF KICKS OFF WITH MORE INTIMATE DETAILS OF THE DUO’S DAY TO DAY LIVES. THEN WHAT FOLLOWS INCLUDES VARIOUS TEXT PIECES AND IMPROVISATIONS. ONE OF THE FORMER IS BASED ON LEWISHAM COUNCIL LEAFLET ADDRESSED TO DOG OWNERS IN THE BOROUGH.
IN THIS PIECE I’M BEING ALLOWED TO JOIN THE DUO AS AN ADDITIONAL VOICE. SO IN EFFECT IT THEN BE A TRIO, AND DEFINITELY NOT A DUO. THE SET ENDS WITH ANOTHER PIECE USING WINE GLASSES, AND OTHER LARGELY PITCHED SOUNDS.
THE DUO HAS GIVEN ME ADVANCED PERMISSION TO MAKE A FEW SOUNDS IN THIS FINAL PIECE AS WELL. AS YET THE NATURE OF THESE SOUNDS HAS NOT BEEN DIVULGED TO ME.

You can see Adam Bohman
on 3rd July 2012 at 8:00PM
at The Horse Pub
124 Westminster Bridge Road
(Near Lambeth North tube)