Robert Beer in conversation with James Tregaskis – discusses topics including near-death experiences, life between lives, his LSD-induced kundalini crisis and how he became a dealer in buddhist art. 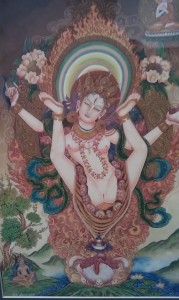 Robert Beer, has studied and practised Tibetan Art for the past forty years and is now recognized as one of the foremost scholars in this field. Author and illustrator of the “Encyclopedia of Tibetan Symbols and Motifs“, and the “Handbook of Tibetan Buddhist Symbols“. He has illustrated Indian Mahasiddhas in his book “Buddhist Masters of Enchantment.” and Over the past fifteen years he has been working closely with the most talented Tibetan thangka painters of the Kathmandu Valley and Newar artists and is curating exhibition of his work, currently running at the October Gallery in Old Gloucester Street until 26th May.

Robert is giving talks at the October Gallery

Saturday, 5th May, 2012 3:00PM
The Cosmology of the Outer and Inner Universe according to the Indian and Tibetan Buddhist Traditions

Tuesday, 8th May, 2012 6:30PM
Death and Rebirth in the Buddhist Traditions in the light of modern near-death studies and spiritual regression

Friday, 18th May, 2012 6:30PM
Wrathful Deities and their Symbolism, an introduction.
(in conjunction with Museums at Night)

One thought on “Outsider In – Robert Beer”