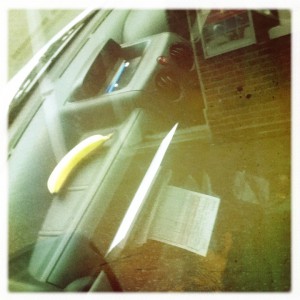 I thought I was getting on quite well, and was certainly showing no signs of delirium or derangement or discontent. Then I happened to mention the business to a colleague, who suggested that it was perhaps the contents of the inner glove compartment, the stuff I had crammed into it, with which I needed to get in touch. This was a revelation which necessitated a further round of metal tapping machine messages. From the responses I received I was able to draw up a lengthy list of items. Granted, this was a list of the things my car-owning acquaintances kept in their actual glove compartments, rather than the contents of my own inner one, but it gave me something to work with. And work I did, my mental cogs whirring away, greased and thrumming.

This episode was recorded on the 16th June 2011. A complete transcript of this episode can be found on Frank Key’s Hooting Yard website. Accompanying Hooting Yard On The Air, the six publications We Were Puny, They Were Vapid, Gravitas, Punctilio, Rectitude & Pippy Bags, Unspeakable Desolation Pouring Down From The Stars, Befuddled By Cormorants , Inpugned By A Peasant And Other Storiesand Porpoises Rescue Dick Van Dyke are available for purchase