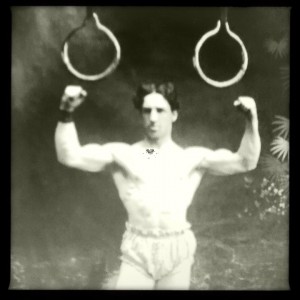 News just in that weedy versifier Dennis Beerpint has been appointed Poet In Residence at Beppo Lamont’s Travelling Big Top Circus. Chief among his duties is to write a life in verse of the circus strongman, Lars Tax, also known as The Mighty Lars. So strong is Mr Tax that he has been known to hoist o’er his head a container lorry cram-packed with smithys’ anvils while pulling a concert hall across a field with his teeth. For the duration of his residency, our fey poet has been billeted in Lars Tax’s caravan, a flimsy construction of balsa wood and straw regularly subject to ruinous damage when the strongman engages in such mundane activities as yawning or combing his hair. By more or less imprisoning him with his subject, it is hoped that Beerpint will dash off a vivid “Life” fairly quickly, after which he can concentrate on other Big Top topics, including clowns and bears and trapeze artists and lions.

This episode was recorded on the 7th April 2011. A complete transcript of this episode can be found on Frank Key’s Hooting Yard website. Accompanying Hooting Yard On The Air, the six publications We Were Puny, They Were Vapid, Gravitas, Punctilio, Rectitude & Pippy Bags, Unspeakable Desolation Pouring Down From The Stars, Befuddled By Cormorants , Inpugned By A Peasant And Other Storiesand Porpoises Rescue Dick Van Dyke are available for purchase