A while ago I wrote about hiking pickles, and today I want to address the equally important topic of pudding flaps. Flaps about pudding are rarer than they once were, chiefly because puddings play a less critical role in our diets than used to be the case. Time was when no meal was innocent of a pudding, and though of course not every pudding preparation was the occasion of a flap, the incidence of such flaps was obviously more frequent. 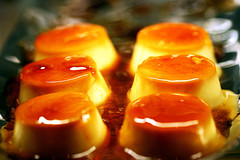 One or two psychoculinary statisticians have attempted to put a precise figure on the occurrence of pudding flaps, and one feels pity for them, pity mixed with mocking laughter. Sooner or later, I think, we are going to have to accept that we will never know how often the making of a pudding was done in a state of flap, certainly not to a statistically significant extent.

This episode was recorded on the 11th October 2007. A complete transcript of this episode can be found on Frank Key’s Hooting Yard website. Accompanying Hooting Yard On The Air, the two publications Unspeakable Desolation Pouring Down From The Stars and Befuddled By Cormorants are available for purchase.