If you were fortunate enough to be hanging around with Blodgett on a Thursday morning in the middling years of the last century, you would as likely as not have been witness to a display of rare skill. For it was Blodgettâ€™s endearing habit in those days, on Thursday mornings, to bash out various national anthems, using his fists, and sometimes sticks, on the base of an upturned biscuit tin. 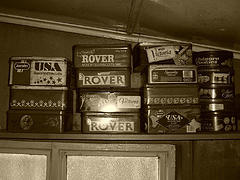 He would have eaten all the biscuits for his breakfast, of course. Blodgett had learned by heart the national anthem of almost every state and statelet on the planet, reduced each one to its rhythmic core, and bashed them out on biscuit tins. He would do this at home, or by the edge of a pond, or halfway up a hillside. In truth, it mattered not where he was, for he had fallen into a routine. Thursday meant biscuits for breakfast, then bashing out anthems. So energetically did he thump and bash that by the end of his recital the biscuit tin would be a dented and effectively destroyed thing. Apparently he passed the ruined tins on to Jasper Poxhaven, the sinister scrap metal dealer whose yard was a few doors away from Blodgettâ€™s chalet.

This episode was recorded on the 6th October 2007. A complete transcript of this episode can be found on Frank Key’s Hooting Yard website. Accompanying Hooting Yard On The Air, the two publications Unspeakable Desolation Pouring Down From The Stars and Befuddled By Cormorants are available for purchase.