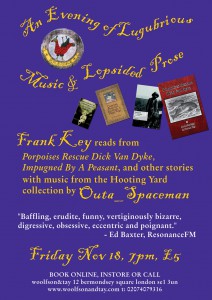 But what of Chamfer Ticktape himself? How did he paint, in swathes of brightly-coloured emulsion, the hideous countenance of the deckhand, without himself succumbing to gibbering, and to insanity? For years, the noted Royal Academician has refused to speak of his painting, referring all enquiries to his PR toady, a master of obfuscatory fol-de-rol. At various times, this slippery fellow has hinted either that the artist was blindfolded as he painted, or that his brain was protected by a mysterious carapace, or that he prepared a “painting-by-numbers” grid and directed the execution from behind a screen, his assistants then being carted off one by one to the very same grim bleak windswept granite asylum, perched on the hillside, where they are kept in a separate wing, also locked, in which they gibber insanely while sucking on wafers. Not one of these tales is likely to be true. Some say the deckhand is a self-portrait of the painter, but how could that be? Chamfer Ticktape is a man-about-town, sweeping in and out of fashionable restaurants and nightspots, in cape and muffler, pursued by paparazzi, and he does not leave in his wake a trail of the gibbering and insane.

This episode was recorded on the 17th March 2011. A complete transcript of this episode can be found on Frank Key’s Hooting Yard website. Accompanying Hooting Yard On The Air, the six publications We Were Puny, They Were Vapid, Gravitas, Punctilio, Rectitude & Pippy Bags, Unspeakable Desolation Pouring Down From The Stars, Befuddled By Cormorants , Inpugned By A Peasant And Other Storiesand Porpoises Rescue Dick Van Dyke are available for purchase