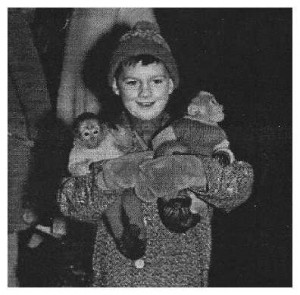 I banged my head on the baptismal font, but that was only the beginning of my troubles. The font was hewn from adamantine rock, and the water it contained, though of necessity holy water, was icy. When the priest slopped it on to my bashed head, I screamed at such a pitch that a stained glass window depicting the martyrdom of St Bibblybibdib (spikes, tongs, fire) was shattered. A falling shard sliced the priest’s jugular, and he collapsed, but not before dropping me into the font. While I splashed about, bawling and freezing, minuscule organisms with which the water was riddled swam into my ears, and burrowed tiny tunnels into my brain, wherein they laid their eggs.

This episode was recorded on the 13th January 2011. A complete transcript of this episode can be found on Frank Key’s Hooting Yard website. Accompanying Hooting Yard On The Air, the six publications We Were Puny, They Were Vapid, Gravitas, Punctilio, Rectitude & Pippy Bags, Unspeakable Desolation Pouring Down From The Stars, Befuddled By Cormorants , Inpugned By A Peasant And Other Stories and Porpoises Rescue Dick Van Dyke are available for purchase.