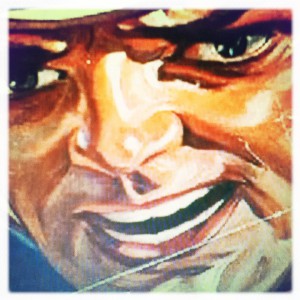 They called him Blomqvist, and he was the village wrestler. He lived in a room above the post office. No other living being ever set foot in the room until the day Blomqvist died. They found him lying on his bed, as if he were asleep, but there was no doubt that he was dead, for hovering above his chest was a baleful phantom, emitting gruesome suppurations of foul-smelling extraterrestrial hideousness which it poured into a funnel inserted into Blomqvist’s right ear. They closed up the room and nailed the door shut. It remained unopened for the next hundred years.

This episode was recorded on the 25th November 2010. A complete transcript of this episode can be found on Frank Key’s Hooting Yard website. Accompanying Hooting Yard On The Air, the six publications We Were Puny, They Were Vapid, Gravitas, Punctilio, Rectitude & Pippy Bags, Unspeakable Desolation Pouring Down From The Stars, Befuddled By Cormorants , Inpugned By A Peasant And Other Stories and Porpoises Rescue Dick Van Dyke are available for purchase