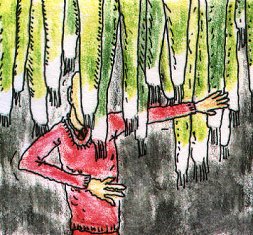 Over the years I have watched various crew members of ships, from Rear Admirals to barnacle scrapers, perform all sorts of baffling physical manoeuvres, and not once have I thought any of it fitted the definition of jiggery-pokery, except on one occasion when I was aboard a very sinister ship which sailed into a clammy mist, in which all sorts of ugly shenanigans took place until, at the last, I was marooned, with several other paying passengers, upon a remote atoll, populated only by squelchy creeping things, and bereft of paper and pencils and writing desks and panels of adamantine hardness.

This episode was recorded on the 30th September 2010. A complete transcript of this episode can be found on Frank Key’s Hooting Yard website. Accompanying Hooting Yard On The Air, the five publications We Were Puny, They Were Vapid, Gravitas, Punctilio, Rectitude & Pippy Bags, Unspeakable Desolation Pouring Down From The Stars, Befuddled By Cormorants and Inpugned By A Peasant And Other Stories are available for purchase