Doctor Cack was the foremost potato scientist of his day. He rented a disused Leaking Building in the grounds of the House, together with a number of surrounding huts, in which he and his team of top flight tuberologists lived and worked. Most of their unbearably exciting scientific equipment was located in the Leaking Building, through the door of which Blodgett now crashed, breathing heavily through his purple nose.

“Cack!” he shouted, pronouncing the good Doctor’s name as if he were a chocolate swiss roll, or a Battenburg. Towards the back of the Leaking Building stood an enormous table on which were stacked flasks, test tubes, scientific hammers, awls, retorts, dye buckets, cruet sets, trunnions, shards of propylite, alembics, jars, lenses, and a burnt quintain. From behind this agglomeration of rubbish, Ruhugu’s head appeared, then the rest of his body. He peered at Blodgett with distaste. 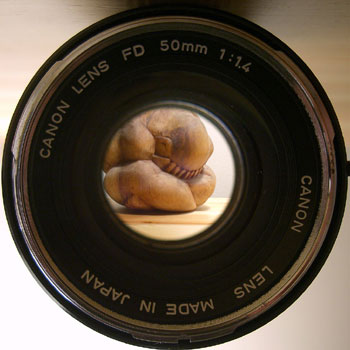 Ruhugu was one of Doctor Cack’s assistants, perhaps the most fanatical. “It’s Cack,” he said, “To rhyme with Snack.”

Blodgett trembled with rage. “I’ll give you Snack,” he rasped, although what he meant by this was not entirely clear, even to him. “Cack, Snack, it’s all the same to me,” he continued, “I don’t care if he’s called Pack, Rack or Glack. He’s still a git.” He paused long enough for Ruhugu to interrupt.

“The Doctor is not here at the moment. Why are you flailing your arms around in such an alarming fashion?”

Momentarily disconcerted, Blodgett manoeuvred his hands into his filthy pockets.

“Thank you,” said Ruhugu, “Now, as I explained, Doctor Cack is away. I have important potato matters to attend to, so I’d be very grateful if you would turn on your heel and begone.”

Blodgett’s temper was getting hotter. Oh, how he would like to immerse Ruhugu in a vat of custard, bind him with manacles, belabour him about the temples, and abandon him in a ditch! Not necessarily in that order. But of course, Blodgett was a terrible coward, and would only attack defenceless tinies, small frail animals, and inanimate objects, and only then if he was sure no vengeance would be exacted by some gigantic protector. He spat on the floor, whirled around, and clomped out of the Leaking Building, cracking his head on the lintel as he did so.