As far as I can ascertain, the second album by the band VRIL has been made without any bee involvement whatsoever. These eighteen new waxings by the group – now a quartet – form the soundtrack to the European arthouse film classic The Fatal Duckpond.. Seven hours long, black and white, and silent for large s t r e t c h e s apart from these musical numbers and sparse patches of dialogue mumbled in an incoherent and invented language, the film is a visionary reworking of the 1956 Hollywood western The Bloodsoaked Revenge Of Escobar Beppo, itself an adaptation of a rare and little-performed Jacobean drama whose author was stabbed to death in a brawl and whose corpse was flung into the then stinking Thames. 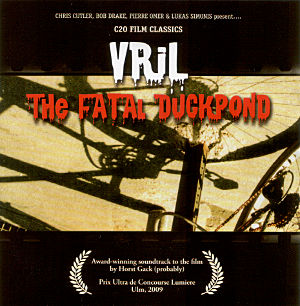 This episode was recorded on the 11th June 2009. A complete transcript of this episode can be found on Frank Key’s Hooting Yard website. Accompanying Hooting Yard On The Air, the four publications We Were Puny, They Were Vapid, Gravitas, Punctilio, Rectitude & Pippy Bags, Unspeakable Desolation Pouring Down From The Stars and Befuddled By Cormorants are available for purchase.