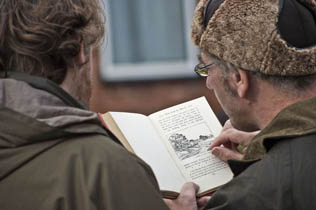 In this episode John and Nick take a topographical ramble through the pages of The Fringe of London by Gordon S. Maxwell published in 1925. They hold this book as being the holy text of suburban wayfarer. Includes field recordings of a trip to Monks Park near Wembley following Maxwell’s chapter on that suburb when it was a rural district. They also discuss Maxwell’s writing with Professor Kristen Bluemel.

More info about the episode can be found here.