The Cow & Pins was a singularly squalid tavern, much frequented by human scum. Once, long ago, it had been a coaching inn, but the construction of an efficient canal system destroyed the coach trade, and bargees passing by aboard their barges upon the canal were a salubrious lot who drank tea from flasks and read improving literature. The Cow & Pins stood crumbling and forlorn on the lane parallel to the towpath of the canal, and soon only the crumbling and forlorn, the indigent and misbegotten, the violent and the psychopathic ever set foot upon its rotten sawdust-covered floor. 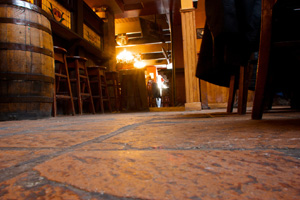 This episode was recorded on the 29th January 2009. A complete transcript of this episode can be found on Frank Key’s Hooting Yard website. Accompanying Hooting Yard On The Air, the three publications Gravitas, Punctilio, Rectitude & Pippy Bags, Unspeakable Desolation Pouring Down From The Stars and Befuddled By Cormorants are available for purchase.