The monthly show about cult and world cinema. In this month’s show, Electric Sheep Assistant editor Alex Fitch talks to the director – Steven Gomez – and cinematographer – Simon Dennis – of a excellent new British Sci-Fi thriller, Kill Command, about robots and drones in an army training exercise going on a murderous rampage, in a Q and A recorded at Hackney PictureHouse as part of SCI-FI-LONDON 2016. Also, University of Reading Professor of Television and Film Jonathan Bignell discusses the influences and connections that 1950s television had on the production of the early James Bond films and novels (Recorded at University of Brighton, Film and Screen Seminar, November 2015). Featuring classic tracks by Pink Floyd, Jimmy Lloyd and Dionne Warwick.

Links: Info about the SCI-FI-LONDON premiere of Kill Command
More info on the creation of James Bond and the 1954 adaptation of Casion Royale

A special episode looking at the output of Avery Hill Publishing: Alex Fitch talks to various creators and staff at this young British Comic Book company about their varied output. In a round table panel discussion Avery Hill co-publisher Dave White, publicity agent Katriona Chapman, plus artists Edie O.P., Matthew Swan, and Owen Pomery discuss moving from self publishing to having a company to help promote your work.

(Panel Borders continues on the 2nd Tuesday of each month at 8pm, repeated the following day at 9am. Originally broadcast as the first half of a Clear Spot on Resonance 104.4 FM, 10th May 2016)
For more info and a variety of formats to stream or download this podcast, please visit archive.org

Panel Borders: The Arab of the Future

Alex Fitch talks to Charlie Hebdo alumnus Riad Sattouf about the first volume of his autobiographical strips about growing up in France, and the Middle East published as The Arab of the Future by Two Roads Books. Alex and Riad explore how the book relates to the latter’s experiences as a film-maker on such movies as Jacky in the Kingdom of Women, plus his interest in Victorian serialised entertainment by Dickens, and children’s adventure comics by Hergé.

(Panel Borders continues on the 2nd Tuesday of each month at 8pm, repeated the following day at 9am. Originally broadcast as the second half of a Clear Spot on Resonance 104.4 FM, 12th April 2016)
For more info and a variety of formats to stream or download this podcast, please visit archive.org

Links: The Arab of the Future website
Info about the graphic memoir at tworoadsbooks.com
Wikipedia page on Jacky in the Kingdom of Women

Celebrating this year’s Polish Film Festival Kinoteka, Alex Fitch talks to Oscar winning producer Jeremy Thomas and director Jerzy Skolimowski about the latter’s work on such films as The Shout, Essential Killing, and his latest movie 11 Minutes. Virginie Selavy talks to writer and filmmaker Daniel Bird about the late director Andrzej Zulawski, and his translation of the director’s Cosmos. With classic tracks by Blondie, Otis Spann, and Mitch Ryder and the Detroit Wheel. Kinokteka continues at various London venues until 28th April, with Skolimowski’s autobiographical trilogy screening at Close-up between 22nd and 24th April. 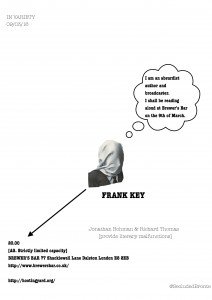 Alex Fitch talks to Eisner Award winning artist Craig Thompson about his first full colour graphic novel Space Dumplings, an uproarious depiction of adventure and galactic travel published by Faber, in which the daughter of an interstellar salvage man goes on a trip of her own meeting aliens, giant robots and space whales. Fitch and Thompson also discuss the latter’s collaborations with other creators such as James Kochalka and Theo Ellsworth and how this might predict more work in the future, including a sequel to …Dumplings.

(Panel Borders continues on the 2nd Tuesday of each month at 8pm, repeated the following day at 9am. Originally broadcast as half of a Clear Spot on Resonance 104.4 FM, 12th April 2016)

Links: Craig Thompson’s blog
Info about Space Dumplings at faber.co.uk
Listen to Alex’s 2012 interview with Thompson about Habibi and Blankets

Following a screening of High Rise as part of the symposium J.G. Ballard in the Seventies, Alex Fitch talks to three members of the production team behind Ben Wheatley’s adaptation of J.G. Ballard’s High Rise. Dan Martin discusses arranging the special effects for the movie and creating realistic gore for Wheatley’s films, Mark Tildesley talks about dressing the set cost effectively and how this compared to working with Michael Winterbottom on Code 46, and Odile Dicks-Mireaux discusses making science-fictional clothes for the cast, including a James Bond style suit for Tom Hiddleston.

Alex Fitch talks to Dan Martin, Odile Dicks-Mireaux and Mark Tildesley on stage at the British Library after a screening of High Rise

Links: Info about the British Library event where this podcast was recorded
High-Rise tumblr page
Electric Sheep podcast about High-Rise and the 1971 production of Crash

Panel Borders: Action – The Story of a Violent Comic

Guest presenter Professor Martin Barker (University of Aberystwyth) investigates the story of Britain’s notorious Action comic, which was launched on Valentine’s Day and banned by Halloween in 1976. Professor Barker explores the rise and fall of the comic, what elements of the strips were censored and censured, and how the legacy of Action was continued in “The Galaxy’s Greatest Comic” – 2000AD. Also, in a panel discussion entitled: “Poor, angry white kids”, Barker discusses Action with its writer Pat Mills and 2000AD artist Jim McCarthy. Edited, and recorded at Graphic Brighton / Cine-Excess 2015 by Alex Fitch.

(Panel Borders continues on the 2nd Tuesday of each month at 8pm, repeated the following day at 9am. Originally broadcast as a Clear Spot on Resonance 104.4 FM, 8th March 2016)

The most notorious cover of Action, and the issue never printed / Barker, Mills and McCarthy at Graphic Brighton and Cine-Excess (photo by Lisa Mills) / cover of The Story of a Violent Comic by Martin Barker

The March episode of the Electric Sheep Film Show is a J.G. Ballard special: ESM editor in chief Virginie Sélavy talks to his daughter, artist Fay Ballard, to director Harley Cokeliss, who made a version of Crash featuring J.G. Ballard for the BBC in 1971, and to director Ben Wheatley about his new adaptation of High-Rise, which is out in cinemas on 18 March. With classic tracks by The Shangri-Las, The Residents and The Specials. (Edited and introduced by Alex Fitch)

Still from Crash by Harley Cokeliss / ‘Memory Box: About my Father’ by Fay Ballard / Still from High-Rise